Stalin, Hitler and the Treaty of Non-Aggression

While Stalin was busy with having millions arrested, tortured, imprisoned and/or executed, he also turned a blind eye toward Hitler and the Nazi genocide of German Jews. In many ways, the two dictators were operating with similar goals - complete domination of their respective kingdoms - and used similar methods - mass removal of entire populations from their homes to prison camps, or in Stalin's case, relocating the population of a region to another simply to punish their perceived misdeeds. One of the most remembered is the systematic relocation by train of practically the entire population of Chechnya because too many among them refused to bend to his will and turn over the allotted amount of production as a state "tax."


Hitler despised Stalin as he did all Slavic peoples and Stalin did not trust Hitler, but the two men needed the peace treaty for their own ends, much to the anger and bitter frustration of many of the Baltic States and  especially Poland, the first country Hitler's armies invaded. The peace held until 1941 when Hitler was no longer content with conquering Western Europe and decided he could use his Panzers and Blitzkrieg tactics to take Moscow within a year. He was wrong. Like many other invaders of Russia, including Napoleon, he did not fully take into account the severity of Russian winters and a terrain of Taiga forests that when blanketed with snow provided no sense of direction nor allowed for soldiers and commanders to get their bearings accurately. Despite these major handicaps, the Nazi army eventually came within only about one hundred kilometers of Moscow before they were stopped cold by a brutal arctic blizzard that pounded an army already stretched very thin and without adequate supplies of food and warm clothing. The German invaders had underestimated what both the Red Army and Mother Nature could do to prevent invading soldiers from reaching their goal.

The "Treaty of Non-Aggression" signed by representatives of the Soviet Union and Germany in August of 1939 was touted as a simple extension of the previous neutrality agreement signed between the two countries in 1926. The treaty was nicknamed the Molotov-Ribbentrop Pact by the average citizens because of the two men who drafted and signed the brief agreement, Soviet foreign minister Vyacheslav Molotov and German foreign minister Joachim von Ribbentrop. The non-aggression treaty, signed during the night of August 23 in Moscow, 1939 asserted that each country would remain neutral in the event either was attacked by a third party. Article II: "In case one of the contracting parties should become the object of war-like acts on the part of a third power the other contracting party will not support that third power in any form."* For Hitler, this meant he did not have to worry about a war on two fronts and could continue his march across Western Europe. For Stalin, it meant that he was free to flush out saboteurs and "wreckers" among the rank and file of the Soviet Union.

Most of the articles of the treaty favored Germany and Hitler's plans for conquering the planet. In fact, Article IV was worded practically in anticipation of the formation in 1941 of the Allied nations against Nazi Germany which consisted of "The Big Three" - the British Empire, Union of Soviet Socialist Republics and the United States - as well as 16 other countries including France, Czechoslovakia, Canada, Australia, Greece, Yugoslavia, Poland and Brazil. The article stated that "Neither of the two contracting parties will participate in any grouping of powers which is indirectly or directly aimed against the other party." Of course, the minute Hitler ordered his armies to invade the Soviet Union just after 3 a.m. of June 22, 1941, the treaty was voided. However, Stalin had ignored warnings from intelligence services that such an attack was not only likely, but imminent. Because of this blind blunder the Red Army suffered 4.3 million casualties and three million more were captured in only six months after the initial invasion.

The treaty itself was an initial step on Hitler's part to buy time while he waged war in Western Europe and there is no direct evidence that he ever had any intention of honoring the agreement any longer than it suited him. But the treaty signed by the two foreign ministers was not the only agreement that the two countries decided upon. What no one outside the walls of the Kremlin other than Hitler and his closest advisers was that there was a "secret protocol" attached to the Molotov-Ribbentrop Pact which divided up Eastern Europe between Germany and the Soviet Union into so-called "spheres of influence." Finland, Latvia and Estonia were assigned to the Soviet sphere while Poland was split between the two countries based on presumed political motives within the country and Lithuania was at first under the German sphere then later shifted to the Soviets. The maps below show the initial intent of the division according to the "Secret Protocol" (left) and the actual division in which the Soviet Union annexed the Baltic States and added them formally as republics of the Soviet Union in 1948 (right), without the consent of the citizens of these countries. At the same time, Finland and the USSR went to war over the Soviet attempt to annex them as well and eventually the Red Army backed down from this venture, although the USSR did gain two small portions of Finland - Karelia and Salla as can be seen below. 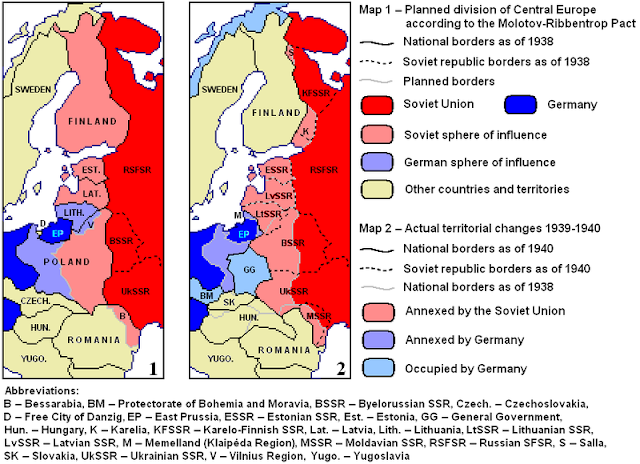 Since Hitler's first country of choice to invade was Poland, he did not want opposition from the Soviet Union at this stage of his overall plan. Hitler was allowed to expand the German borders as he wished within Eastern Europe which later included invasions of Hungary, Romania and Greece.

The pact was a treaty of convenience for both parties. Stalin wanted the UK and the US to agree to his wish to annex the Baltic States, but since they would not, he decided it would be better to have a peace treaty with Germany for the meantime until the Allies (in 1939 the "Allies" consisted of the UK, France and the US, even though the US had not officially gone to war yet) were more willing to see things his way.

Another aspect of this treaty with Germany was that the NKVD met with the Gestapo on several occasions in Poland and helped train the SS on tactics for killing large numbers of captives at one time. It is well known that the Gestapo itself was founded in the image of the NKVD by German officers who had trained in the Soviet Union and many other tactics for dealing with rebels and "undesirables" (or as the Soviets termed them, "bandits") because high ranking members of the Gestapo noticed during their collaboration with the NKVD on border areas that the NKVD was far more efficient and effective in carrying out Stalin's murderous plans. It was not uncommon for NKVD officers to capture German Jews who fled from Germany and across the border into a Soviet Sphere of Influence and then turn them over to members of the Gestapo.

Perhaps the most disturbing result of the pact pertained to Poland and the officers and soldiers who fought the Germans when they invaded and/or the Soviet Red Army when it began occupying western Poland (see maps above). In 1939, about 180,000 Polish prisoners of war were turned over to the Red Army which divided them up with the regular soldiers being taken to labor camps and the officers and other ranking leaders who fought the Nazi invasion taken to three "special camps." There was a total of approximately 15,000 men placed in camps at Kozelsk (near Smolensk), Starobelsk (near Kharkov), and Ostashkov (Kalinin district). All three camps were under NKVD control and all of the prisoners were subjected to intense interrogations and Soviet propaganda.

After the USSR reestablished diplomatic ties with the Polish government in exile in London, the Soviets assured the Poles that the prisoners from these three camps would be released and later insisted that they had been released. However, no one outside of the NKVD ever saw any of them again.

In 1943, German soldiers discovered several mass graves in the Katyn Forest near the Kozelsk camp and the Nazis announced the discovery to the world press. At first, the Stalin and the Polit Bureau remained silent while the Germans announced that all of the 4,400 dead in the mass graves had their hands bound behind them and were each shot in the back of the head. When world leaders began demanding answers the Soviet propaganda machine tried to turn the tables on the Nazis saying that it was the German army that had killed these people and tried to label it as another Nazi atrocity.


In 1946, none of the judges would put blame on either party for the Katyn Massacre, even though the Soviets continued to point the finger at the Nazis. It was not until 1990 that two similar sites of mass graves were found near the other two special camps, and the many years of not knowing for certain who was responsible for all of the killings came to an end in 1992 when then president Boris Yeltsin of the Russian Federation turned over documents to the Polish government proving beyond all doubt that the 15,000 people had been executed under Stalin's orders by the NKVD.