The Soviets and the Russian Orthodox Church


This site is not intended to cover every aspect of what created the USSR so much as how power was maintained by the Communists through the various state security agencies they had at their disposal. However, some aspects of how Lenin and subsequent leaders maintained control over the people of the Soviet Union are highly controversial yet significant historical facts. For example, one of the first organized oppositions to the Bolsheviks' support of the provisional government after the abdication, exile and later execution of Tsar Nicholas II was the Orthodox Church. For the 300 years of Romanov rule, beginning with Peter the Great, the Russian Orthodox Church enjoyed a certain amount of freedom to maintain its "state within a state" with an abundance of money and even more land and other properties. Orthodox Church leaders were regularly members of court and spiritual counselors to the tsars, ending with the most infamous  Russian spiritual adviser Grigori Rasputin. Though Rasputin was a peasant wandering monk more than an ambassador of the Church, he nonetheless represented to many critics of the tsarist rule all that had become corrupt within the Russian Orthodox Church - and the Bolsheviks made good use of this attitude in propaganda designed to sway people away from organized religion (specifically the Russian Orthodox Church) and toward the atheist materialism of the followers of Marx. In fact, some historians have credited , perhaps a bit too strongly, Rasputin with unwittingly aiding in the fall of the Romanov dynasty through his open abuse of his position. He was brought to St. Petersburg at the behest of Empress Alexandra, Nicholas' wife, because of the serious illness of the only male heir, Alexei because he had gained a reputation throughout peasant-populated regions of Russia as a powerful healer. More can be read about the life and murder of Rasputin at the following website: http://it.stlawu.edu/~rkreuzer/indv5/rasp.htm 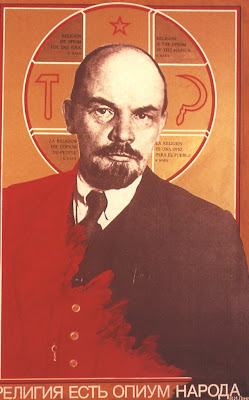 Once the Bolsheviks had a tenuous hold on the government of the Russian Empire in October of 1917, Lenin began his typically indirect assaults on the Russian Orthodox Church and the property it held. Since the philosophy of Karl Marx was one of the planks of the stage from which the Communists shouted their borrowed ideas, Lenin focused in on the now famous phrase from Marx: "Religion is the opiate of the people [German preferred scholarly translation]" or in German: Die Religion... ist das Opium des Volkes. The quote in context as it appeared in Marx's work, Critique of Hegel's Philosophy of Right in 1943, is "Religion is the sigh of the oppressed creature, the heart of a heartless world, just as it is the spirit of a spiritless situation. It is the opium of the people." Marx's critique of organized religion was that since it was a reflection of society, problems within the Church represented problems within society. More simply put, religion is not the cause of society's problems, it is merely a reflection of them. Lenin, however, used the single statement from the entire critique of religion from Marx as a mantra of sorts justifying the revolutionaries' actions toward the Church. Though the Bolsheviks did not ban religion all together (they had learned from history that this would have been a serious mistake), they did appropriate Church property, demolish many churches and monasteries in order to convert them into public use facilities such as arenas, meeting places, and in the case of the Nikolo-Ugreshky (full name in English: St. Nicholas the Miracle-Worker) monastery in the town of Dzerzhinsky was converted by Felix Dzerzhinsky himself into a commune for homeless children. The chapels and other religious buildings were converted into more utilitarian structures of various functions over the years including converting the massive cathedral on the grounds into a gymnasium and basketball court for the "advancement of the physical culture" of the people. Originally, there was no "town" or settlement outside of the monastery walls, but when the commune and children's labor colony grew far beyond the confines of the walls, the new settlement was given the name Dzerzhinsky in 1938 and is currently an industrial town of about 44,000 people.
﻿﻿


In many ways, this particular example was what the Soviets claimed to want to achieve in seizing churches, monasteries and convents. The first direct takeovers of churches were all "military" Church properties which were basically any religious institution built with walls at a strategic part of the country and heavily occupied by military personnel, and in this as in many cases, it was built on the Moscow river. (The study of the history behind walled/fortified monasteries is a lengthy one best served elsewhere.)

By the time the KGB officially came into existence in 1954, they already had several operatives who were trained by and posed as Orthodox priests. As the Cold War accelerated and the mistrust of its own people became nearly as profound and widespread as it was during Lenin's "Red Terror" and Stalin's "Great Terror" or "Great Purge," Orthodox priests were commonly forced through various means, most often blackmail, to become informants for the KGB. It was important the  Second Main Directory: Counterintelligence, because they believed they could best root out groups from the solitary individual who is disillusioned with the Soviet Union as an ideology to those planning and organizing anti-Soviet activities. Until the end of Communist rule the Church was rife with KGB agents and informants - a problem that took many years after 1991 and the initially tacit restoration of the of the status of the Church to resolve since most people knew better than to trust the average Russian Orthodox clergy member.

﻿
Not long after the death of Lenin the most famous demolition of a Russian church took place in Moscow. By indirect order of Stalin, on December 5, 1931 Christ the Savior Cathedral was demolished to allegedly be replaced by Stalin's "Palace of the Soviets" - which due to variety of reasons was never built, including the lack of funds and the required build up of troops after Hitler's Nazi's started to grow restless within the confines of Germany. By the time the Red Army was fully committed to WWII, construction had only been completed for the foundation of the Palace of the Soviets. As the largest Christian Orthodox Cathedral ever built, the destruction drew the attention of many people across the country as a symbol of a faith along similar lines as if the Vatican were flatted one day and the Roman Catholics around the world could say nothing out of fear of being locked away in an insane asylum or a prison labor camp and/or execution if a state security agent overheard him or her voicing dissensions. All of the fearful possibilities existed for anyone who got the wrong person's attention by speaking out against anything Stalin approved of. For many years after the war various projects were considered, but since water had a tendency to collect and flood the area, some civil engineer was certainly awarded well for coming up with the notion of making the former foundation of an enormous cathedral into an enormous public swimming pool that was simply called "Moscow." The pool was plagued with "structural problems" and was practically never open in the 34 years it remained before reconstruction of the cathedral began.

﻿﻿
﻿﻿In 1990, permission was given by the still Soviet Government to rebuild the cathedral in replica of the original. Despite many controversies ranging from the architectural design to the actual rebuild on ground which some believe is "cursed," the cathedral was officially consecrated on August 19, 2000. That same year the last Imperial Russian Tsar Nicholas II and his family were canonized as saints within the Russian Orthodox Church.

The shift from enemy of the state to sainthood for Nicholas II is about as far a departure from the Soviet ideology of atheism as imaginable.
﻿ ﻿﻿